Christopher Nolan’s use of minimal GCI, no green/blue-screen, 70mm film as opposed to digital, all on gargantuan IMAX cameras - always achieves an epic scale; glossy, crisp, striking authenticity which is now the hallmark of his work - and instantly recognisable.
Even when he’s operating within the most elaborate narratological perametres: memory (Memento), murder (Insomnia), magic (The Prestige), seminal, heroic sagas (The Dark Knight Trilogy), the human subconscious (Inception), or Interstellar: Structure, tone, time, and perspective, are either foregrounded or subverted - without ever being overshadowed by the innovative techniques implemented.
In many ways, Dunkirk, is his most avuncular work: stripped-down, back-to-basics, viscerally intense, extremely immersive and authentic - his most conventional, risky, and both utterly subjective and objective, simultainiously - without ever losing that customary quality of being superbly mounted and staged.
As a writer, his polished screenplay remains as knowingly sparse and cut-to-the-quick as ever. Nolan’s stated his intention was to make a suspenseful survival story - not a war film.
Instead, Nolan frames a stunningly realised technical achievement of placing the audience on those fateful dunes, in the frenetic cockpit, or on a submerging ship - with land, air and sea each being represented through their increasingly tense timelines - to absolutely stunning effect.
All performances are excellent. Fionn Whitehead infuses integrity as the lead soldier, the much-hyped casting of a solid Harry Styles completes the trio; it’s Aneurin Barnard’s almost mute Gibson, who really stands out. Barnard, has such a depth of soulful intensity of pathos in his eyes - (ITV’s Cilla, and BBC’s brilliant SS-GB).
Tom Glynn-Carney is especially gripping as Peter, the eldest son of the unassuming Mr. Dawson (subtly, exceptionally played by the king of humble humility in acting classicism: Mark Rylance). Rylance may end up fighting it out with a precise Kenneth Branagh, or conflicted PTSD soldier Cillian Murphy for Supporting Actor accolades.
As should Hoyte Van Hoytema’s peerless cinematography. Blistering aerial set-pieces, mean real spitfires fill the screen, with Tom Hardy’s pilot adding gravitas as always.
This is all enhanced tenfold, by Hans Zimmer’s inimitably propulsive, perpetual thrum of score; ratcheting up the tension even further. Fantastic, extremely slickly assured, profoundly emotionally prescient - a leviathan piece of bravura filmmaking.

Posted by James Burgess at 08:20 No comments:

The sixth movie, third reboot in 15 years, and third casting change (after intentionally meek Tobey Maguire with Sam Raimi (2000-2008) and the nervy, captivating Andrew Garfield (2010-2015 with the aptly named Marc Webb (500) Days Of Summer).
Garfield still remains my favourite actor in the role, but crucially I think the original Raimi Trilogy (2002-2007) are far better films than any that have followed subsequently. This has very little to do with Maguire’s performance ironically enough, and has far more to to do with his always excellent, conflicted, soulful foil - James Franco as Harry Osbourne, who worked with Raimi again, playing the titular magician in 2013’s outstanding revisionist origin-reboot Oz: The Great And Powerful. Not to mention a maniacally-cackling Willem Dafoe as his father in that trilogy - the fantastic, gleefully vengeful father and junior of Green Goblins!
Now, with Sony’s studio-head Amy Pascal and producers Matt Tolmach & Avi Arad to change up that iconic red-and-blue web-slinger who’s adorned many a bedroom wall, billboard or bus the world over, it’s 21 year-old Tom Holland (19 when he was cast).
Holland is very strong in the role; performatively, emotionally and physically, without ever feeling nervous or phased at all by being the webbed figurehead, and not only playing the messy duality of Peter Parker/Spider-Man, but also joining as Marvel’s property for the first time, owing to Disney and Marvel not wanting their most iconoclastic character to lose his spun strand of comic-book credentials.
As much as I love the universe crossover with the Avengers, post-credit Easter-egg cameos (Downey Jr - tired, and Paltrow - underused, Chris Evans - funny), Jon Watts’s film doesn't retain the grandiose potency of Raimi’s trilogy, which the character had tenfold when he was on his own. Its ratio of grand-scale set pieces to zippy comedy is frustratingly unbalanced. There’s too much high-school angst, not enough origin development or chance for Holland to show nearly enough pathos.
Micheal Keaton is effortlessly terrific as the villainous Vulture, channeling his inner Buffalo Bill. My favourite scene has a huge, yet small-scale, domesticated twist with moody cinematography and tense revelation during a deceptively convivial exchange at traffic-lights.
There’s a well-staged van-heist, a highlight scaled up Washington monument with Micheal Giacchino’s trademark tinkly, perpetual score. Slight, but very entertaining. 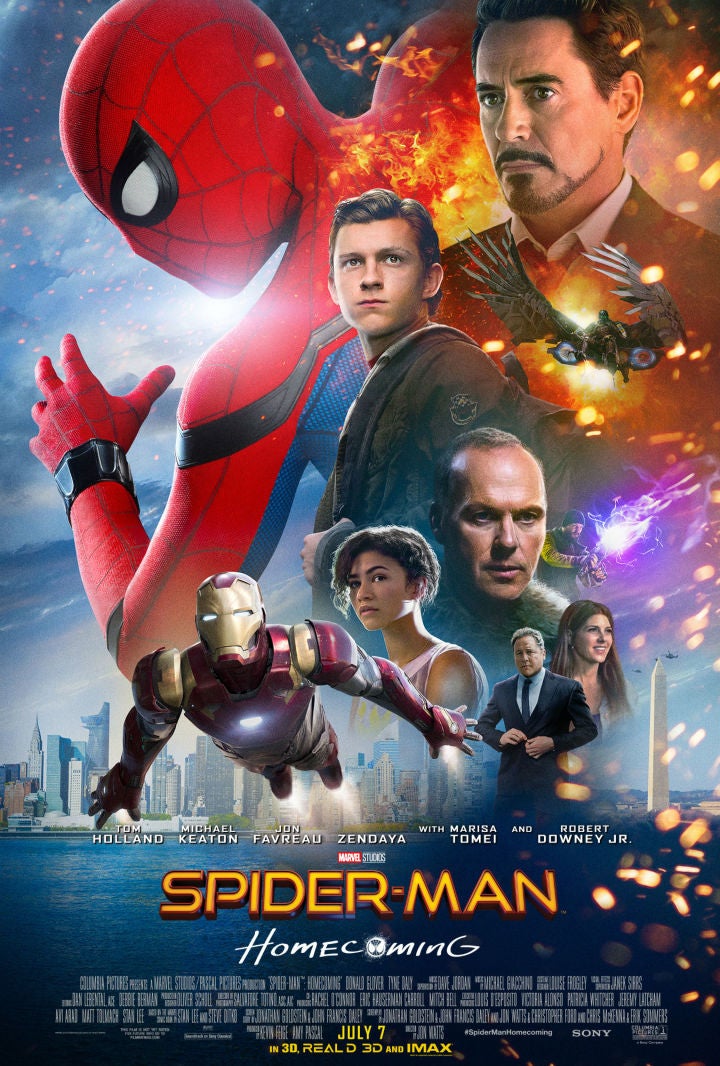 Posted by James Burgess at 12:18 No comments:

In 2010, two ostensibly similar computer-animations were released, less than six months apart. One was Despicable Me, a colourful, family-freindly, bubblegum-plastic, synergy-tied confection of super-villainy turned good.
The other was DreamWorks’s Megamind, a florescence-filled delight of heroics, colour, and super-villainy turned…well, you get the very cynicism-orientated idea by now, I’m sure…
But my cynicism is well-placed - never more so than here - in this heavy, languid, broadly-bogged-down third installment. The first song used lazily here - Micheal Jackson’s Bad - is in fact the last one used in Megamind, and to much the same effect - though it’s not nearly as charming.
From here on in the narrative and stylistic similarity is so shamelessly staggering - I’m surprised DreamWorks don’t sue - I’m sure they’d have a good case. The main difference being of course, that where  Megamind was funny, inventive and light as the frothiest soufflé, this feels increasingly tired and lumpen, a formula cooked up in those perpetually endless metallic corridors these characters are forever running down.
This is a polarising opinion, but I just don’t find those awful yellow minions the slightest bit funny. Like the worst kind of hyperactive offspring, they never shut up! Not that this bothered the many delighted faces in my screening. Never before have I seen so many children so easily and simultainiously pleased, with every flatulence-gun fired or raspberry blown. I suppose the intention was to hark back to a cross between The Marx Bros. and Bananas in Pajarmas - if so, the filmmakers missed the mark widely.
What works far better is the much needed lightness-of-touch from Pharrell Williams. Making everybody ‘Happy’ back in 2013, and ‘Frozen-out’ to an Oscar - (maybe he’s Let It Go) - he’s back here, with songs that cleverly help reference a slew of other films. His infectious anthem ‘Freedom’ is a great ode to The Shawshank Redemption - as well as an America’s Got Talent style sing-off of The Periodic Table Song. (It’s same studio that made Sing - infinitely better). Good performances from Kristen Wiig, Jenny Slate and Julie Andrews, can’t save it from its own gloopy brand of unoriginality.

Posted by James Burgess at 10:57 No comments: