I confess, I’ve never actually seen Family Guy. Based on Ted’s humour though, tonally at least, the two probably aren’t dissimilar. It’s directed by the show’s creator, the multi-talented talented Seth McFarlane, who also voices the title teddy.
Mark Wahlberg, an actually now so associated with serious, conflicted anti-heroes, usually cops are redemptive troubled souls, now turns excellently to gross-out comedy in the Farrelly Brothers mould: fans of Dumb & Dumber, There’s Something About Mary and Me, Myself & Irene will know exactly how sharp the satirical edge will be.
Narrated by the dulcet tones of Patrick Stewart, we see that John has the Christmas present of all, his own Teddy Bear and friend for life. In a very smart opening montage, eagle-eyed movie-fans will delight in references to their very cinematic appreciations, from queuing up in costume for The Phantom Menace, to a Raiders Of The Lost Ark poster on John’s bedroom wall. One particularly distinguishing feature (batteries not included*), is that fact that Ted can talk – and not just when you squeeze his paw. Rest assured though, the grown-up John and his deceptively cute-looking counterpart are suitably foul-mouthed, throwing parties of a vastly more alcohol-fuelled, adult persuasion. At one point, Ted introduces four young girls to an incredulous John and his girlfriend (Mila Kunis): ‘This is Angelique, Heavenly, Shareene and Sauvignon Blanc!’.
The bar of what is deemed acceptable taste, doesn’t exist anymore. It seems literally that any lurid linguistic observation or highly puerile sexual reference can double as hilarity. It’s not that it isn’t funny – it is hilarious, but only at the expense of being shocking first, in an abundance of ‘How did they get away with that?’ - induced gasps from ours and plenty more a  screening, which immediately dilutes its comedic impact. Consequently, this means that the imminent sequel, perhaps won’t hold onto novelty for very long. Where McFarlane has succeeded far better, is in zeitgeist, and parody. There are a great many extremely well-judged referential gems hidden throughout, from an ongoing motif of a shared fascination with eighties’ nostalgia (the second Indiana Jones reference involves Ted’s torn ear and a door left ajar, and their shared love of Flash Gordon leads to a Sam Jones cameo).
Lines of dialogue like ‘That’s my bad I was sending a tweet’, after bumping into another car, or: ‘Back off Susan Boyle!’ – Ted’s inevitable fame leads to kidnap from a scarily convincing Giovanni Ribisi as the father of an Omen-esque son - are surefire crowd-pleasers with a welcome absence of innuendo.
It’s easy to overlook the technical skill of what’s been achieved through seamless CGI to create Ted. Instinctively, he can accomplish any action, without the audience ever knowingly marveling, very much in the style of what Robert Zemeckis achieved with Who Framed Roger Rabbit?, Death Becomes Her, and then much later, employing motion-capture with The Polar Express.
Never in the best of tastes, but it is undeniably, very funny.

From The Cat In The Hat, The Grinch and Horton Hears a Who!, Dr. Seuss has created an array of idiosyncratic, yet oddly endearing characters.
ImageWorks, the company behind 2010’s surprise hit Despicable Me, now have The Lorax, a diminutive tangerine creature akin to the appearance of an orange segment.
Set in a synthetic Technicolor toy-town, (where air is only bottled and run by Rob Riggle’s tiny, evil conglomerate magnate – a male doppelganger for The Incredibles domineering boss) - a pre-teen is smitten with a beauty next door, and he promises to show her a real tree. The Once-ler is an aged, conflicted former woodcutter who tells him the only way to recapture a flourishing, economically healthy land is to enlist the help of the orange troublemaker.
I’ve rarely seen more glossy, fluorescent, aesthetically optimistic computer-animation. It’s a master-class in the tactile and the kinaesthetic, a veritable candy land of colour, texture, and intricate detail. Bubblegum pinks, pop-up flowers (3D reaches it’s vibrant best here), sugar-plumb-esque truffola trees, and those unmistakably apple-cheeked, almost plaster-scene faces (but always expressive).
The voice talent on display is eclectic, from Danny Devito’s rapid mischievousness means the Lorax is nothing by hilariously loveable, to Betty White’s delightful Grandma, complete with dentures! The songs (luckily not too many) are memorable and the jokes are funny – if overly reliant on the side of slapstick.
It’s a total feel-good charmer and a wonder of technical superiority, but it’s screenplay never quite works entirely coherently at feature-length. It occasionally feels like a series of short films strewn together with not a consistent enough narrative throughline, and the dialogue could’ve been a touch sharper. Still an absolute delight – superlative animation – the best since Megamind. 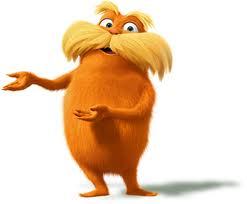 Posted by James Burgess at 13:39 No comments: