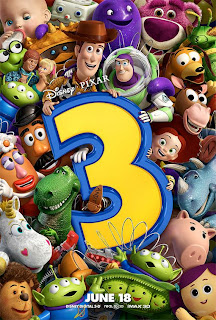 In 1995, the original Toy Story was a cinematic milestone in terms of what the full capabilities of Computer Generated Imagery in the movies really were, being the first ever fully computer-animated film. Its creators, Pixar, are now deservedly seen as the yardstick up against which all subsequent animated films are measured. They are the very best in the business. An even funnier sequel followed in 1999, and now, a full eleven years later, we have a film which sadly, doesn’t quite live up to the other two. That’s a great disappointment, particularly as it started off so well!

As it opens – in all it’s vibrant 3D glory (which really does make a huge difference), all our favourite talking toys are aboard a high-speed train chase in a mock-up Wild West, in a brilliantly inventive sequence which sees Woody trying to defeat Hamm’s evil Dr. Pork Chop.

With Andy now all grown up and going to college, he decides to donate his once beloved toys to the local nursery: Sunnyside day-care centre. They’d better watch out however as, amusingly of course, these toys aren’t age-appropriate for the children they’re for; the meddlesome toddlers are simply too young to appreciate them.

Even though the usual duel child/adult catering of humour isn’t quite up to the usual standards, there are still plenty of appealing new characters to enjoy – as well as of course the inimitable voice talent being them. Among the best are Ned Beatty’s evilly cuddly bear Lots-o, Bookworm, Big Baby and Whoopi Goldberg’s purple octopus Stretch. Michael Keaton is another funny addition as Ken the Barbie doll, and ex James Bond Timothy Dalton is the wannabe thespian hedgehog, Mr. Pricklepants. I’d welcome a rumored fourth installment. Fun, inventive, emotional and colourful. A little disappointing, but still a truly masterly delight.